Let me guess, you’re tired of getting things wrong. Are you making the wrong choices or losing arguments? Why is it that there are so many people in the world that just always seem to be right but you aren’t one of them?

Is it their personality?

Is it because of their attitude?

Are they simply just lucky?

Well, whatever their reasons are, prepare to consider yourself the latter, ‘cause I’m going to show you how to ALWAYS be right*.

* Ergo, to conform to your own judgment, and your personal facts and ideas. We don’t worry about what “experts” or “scientists” think. It’s just their own opinion anyway, isn’t it?

First off, you’ve got to make sure you’re 100% open-minded to change. You need to be open and willing to change at a moment’s notice. Change your mindsets, change your opinions, change your values… you know, for whatever the conversation may be.

“Jeff Bezos is a con artist using Amazon as a method of overthrowing our society.” If enough people agree with this fact and all say it is correct, who’s to say it isn’t..? If you follow step one, it won’t be you.

Always change your opinion to agree with the mass majority. They will never tell you you’re wrong.

If you aren’t confident, then why would anyone listen to you? Make sure you make your intentions clear and never stumble. This will make you more persuasive and more likely people will agree with you.

“Jeff Bezos is overthrowing our government through Amazon. He invented the pandemic as a marketing method so more people would use his service. You’ve used Amazon in the past 9 months, right? See, it’s working.”

Never back down and always press the fact that you are correct.

Bonus points if you throw in *ahem* actual facts.

Use your expertise as leverage. Appeal to Authority is a good one to use if you’re in a position of power. Use your power and influence to make people believe you. Don’t let them question you and who’s to tell you that you’re wrong then, huh? 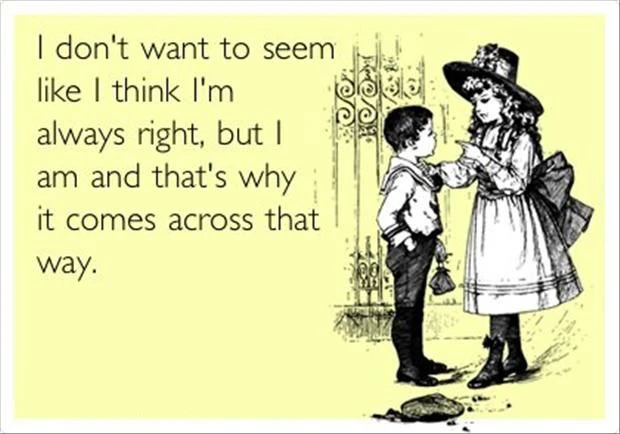 More cognitive biases you can utilize are the Sleeper Effect by using propaganda. Even though they will recognize it as propaganda at the time, as time passes, they will fall deeper and deeper into your reality, and whatever that may entail.

If you aren’t in the mood for creating a full-on movement using propaganda and media, maybe just focus on Pattern Recognition or the False Consensus Effect. Both used conjoined makes a double-whammy effect where it is IMPOSSIBLE to be wrong.

Here’s the thing, people love patterns that don’t really exist. Have you ever looked into the clouds and seen animals and objects?

Just put together a bunch of events that correlate with your story, then relay them to the general public as a known fact. Add in your bode of confidence and willingness to change the story if you receive backlash, and you have yourself a winning argument!

“Jeff Bezos first founded Amazon to sell books to his followers. He began adding additional markets until Amazin became ‘an everything store’. He looked for ‘e-commerce domination.’ Once he became a household name, he continued to add additional products and services. He added Amazon video so he could pollute our minds with propaganda. Over the past 25 years, he has used every possible method to mold the millennial generation into his puppets.”

Go ahead, look it up. Who’s going to disagree with all those facts!?

Put It All Together And Whaddya Got?

You’ve got a winning argument! Either people will stop talking to you altogether or you’ve made them question their own existence! Either way sounds like you definitely are not wrong.

Now that you know the incredible art of being persuasive, you can take your all-knowingness to the bank. But let’s be honest, is it worth it?

What’s the fun in always being right?

You Could Be Wrong Sometimes

If you are right and persuade someone of your opinion, the conversation usually ends right there. There’s no more debate and there’s no more learning. Maybe, just maybe, there’s something to this whole thing about debating.

Have you ever learned something new from someone that you never would have thought of before? Maybe you kept an open mind to whatever they were saying and found something that became a passion.

Maybe if you change your mindset, you can learn to become someone better. You can learn new skills or find new opportunities.

If you are confident, maybe you can change the status quo. Maybe you can take what you’ve learned from being open and responsive and present it to others. Maybe you can help others grow the way they have helped you grow.

Even though you were wrong during your conversation, have the confidence to admit it. Do you really need to be right?

Hell, maybe you both were right.

Take that and make it a learning experience, but that starts with admittance.

Understand that people do not always think in the most productive fashion and they do make mistakes. Even you. Just because someone is in charge or in a place of authority does not mean they know everything.

Do not take coincidence for fact. The brain looks for patterns to make sense of things.

And by God just because everyone is wearing socks and sandals and thinks it is a fashion ICON does NOT mean it is. It does not mean it looks good so please just don’t follow the crowd.

So Being Wrong… Is Right?

You may be right about Jeff Bezos’ intentions (well honestly only Jeff knows the truth on that one), but what if you are wrong? Well, that just means that people can continue to question what his real intentions and motives are.

With no final resolution, the conversation can continue on.

Question everything, never settle, and always seek out knowledge.

That’s how you will always be right.